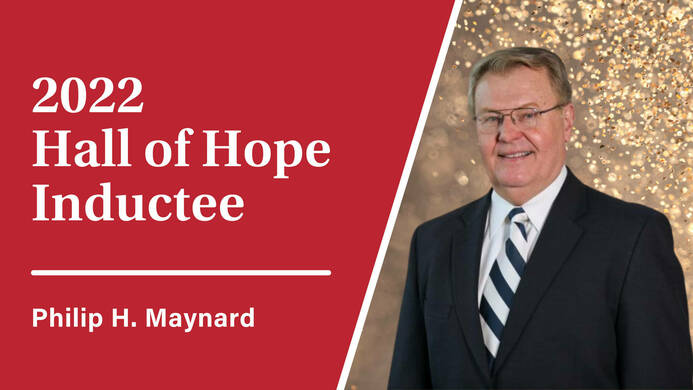 “Phil” Maynard made the world a better place. His dedication to faith, family and to those in need left a legacy that will last forever. His work ethic, combined with a humble and generous heart is the example we all should emulate.

Phil attended St. Francis de Sales Parish School and Archbishop Hoban High School. After leaving Kent State University to enter military service in Japan, he returned home with his new bride Takako and started working a temporary job on Gilchrist Road at Akron Storage and Warehouse while finishing his degree and starting a family. He moved up the ladder quickly, eventually becoming assistant to the president.

Phil purchased his own company, Snyder Distribution Centers, Inc., which he renamed Akron Storage and Warehouse (ASW) in 1983.

“You’ve got to be able to move things expeditiously,” he said in a 2007 interview. “Our whole society is based upon movement, and that to me is basically what logistics is – moving things from Point A to Point B and keeping track of it in transit. Without it, our society comes to a screeching halt.”

After a long career, Phil retired from business in 2007 after the sale and merger of ASW Properties, Ltd. to former Cleveland Indian André Thornton.

Phil’s success in business was undeniable. His devotion to faith, family and charitable causes was nothing short of inspirational.

“He was an honest and generous man, in his faith, integrity and character,” Petures said. “He was a believer in the saying that ‘To those that much is given, much is expected,’ and I think that was rooted in his faith. He was a friend to so many.”

The Maynard Family Center for Spiritual Formation at Hoban High School opened in 2014. The Center includes a chapel as its centerpiece, offices and an area for campus ministry activities. Its focus is to develop a desire in students to serve others and to impact the world in a positive way.

Phil detailed his vision for the Center at the groundbreaking in March 2014.

Phil’s commitment to philanthropy will live for generations to come in the Catholic community as well as the Greater Akron Area. He lived the Gospel every day, making family and the wellbeing of others his priorities. The awards he received were deserved, but the real honor was bestowed on those who knew him and experienced his kindness, humble nature and social conscience. He was one of a kind and we all should strive to be more like him.

Click below to purchase tickets and sponsorships for our Celebration of 110 Years.