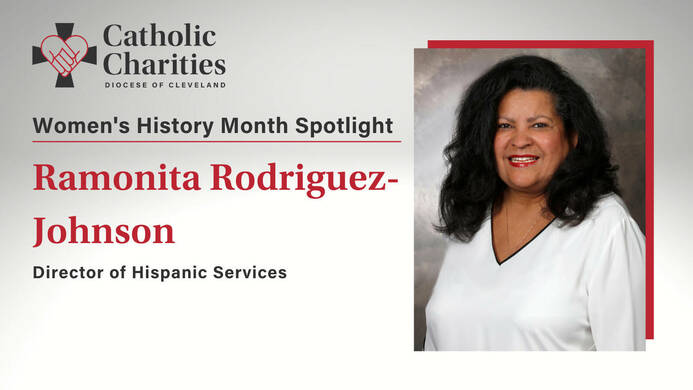 In 1978 the Education Task Force of the Sonoma County (California) Commission on the Status of Women planned a "Women's History Week" during the week of March 8 to be in alignment with International Women's Day. This movement spread, and many other communities started their own traditions.

In 1980, women groups and historians pushed for national recognition, and President Jimmy Carter issued a proclamation declaring the week of March 8 as National Women's History Week.

As celebrations continued, this week turned into something bigger, and between 1988 and 1994, Congress requested and authorized the President to announce Women's History Month.

Here at Catholic Charities, there are many women who make history every day. We want to highlight a few in honor of Women's History Month, starting with Ramonita Rodriguez-Johnson.

Ramonita Rodriguez-Johnson is the Director of Hispanic Services and has been with Catholic Charities for 43 years. On a typical day, she usually has leadership/partner meetings in the morning and then spends the afternoon interacting with her staff over clinical client care, program plans, and running the office. Her favorite part of her job is being able to work on the west side, where she grew up, and work with the Hispanic community and a great staff. One accomplishment that she is proud of is her summer prevention program and the young lives they have touched and continue to touch in positive ways.

Thank you, Ramonita, for your continued dedication and support of the Catholic Charities missions. The work that you do truly makes an impact.